This Missions Ministry started in the Democratic Republic of Congo in North Kivu (Eastern Congo), in the region of Beni and Butembu, in the Ituri rainforest. One thousand four hundred and twenty (1 420) Pygmy village churches were planted over a period of many years. The result of this missionary initiative (Wheels for God’s Word) was that thousands of new village churches came into existence and tens of thousands of souls were added to the kingdom of God.

In October 2012, the Church of God World Missions Africa Council endorsed this evangelism and church planting programme as part of the strategy in Africa, to plant thousands of new village churches in the mission field. In May 2013, the Church of God World Missions Africa Council appointed Raymond as Chairperson of the Firewall Africa project, with the sole objective to evangelise, plant new churches, and equip laymen and make disciples. To date, more than 6 500 new village churches in Africa have been started through this project.

During October 2019 a new era was introduced with the appointment of Pastor Raymond Lombard by the Africa Council Church of God World Missions as the Director of Evangelism and Church Planting and Co-ordinator of the Firewall Project Africa, which operates in 44 countries in Africa. This appointment was approved by the Director of COG World Missions, Dr. David Griffis.

Since 2016 the Firewall Project has developed into a global initiative called the Global Fire Advance. Raymond is one of the founding board members of the Global Fire Advance, who have as their objective, to strategically plan and execute evangelism, discipleship and Church planting around the world. From Africa this work has now spread and to date, strategic training has been done in Panama (Central America), as well as Chile, Ecuador, Peru, and Argentina (South America).

The current Board Members are: 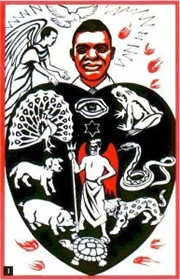 Wheels for God’s Word has developed a mobile application for sharing the gospel of Jesus Christ, using an Apple or Android cell phone.

The Heart-of-Man presentation is based on the printed version that is used to evangelise the lost throughout the world. It is an effective tool in assisting evangelists and pastors, and is available in various languages.

The mission is primarily to reach the Unreached People Groups (UPG’s) and least reached people groups in the 10-40 window, and especially in countries where printed gospel media is outlawed. We are also active in countries outside of the 10-40 window, where the Gospel is not welcome, where faith related persecution occurs or the opportunity presents itself.

The Heart of Man video presentation with subtitles is available in the following languages:

In August 2017 Raymond was appointed to serve on the Advisory Council of Re-Forma. This organisation has, at its heart, Biblical training for ministry to specially focus on the 93% of ministers of the gospel of Jesus Christ, who have never been formally trained.

Studies show that 93% of all pastors do not have a formal theological education. According to statistics, that equates to well over 2 million Protestant pastors worldwide. In addition, every year thousands of new Protestant churches are established, very often without a trained pastor or preacher. The biggest crisis facing the evangelical, global church today is the fact that most pastors, missionaries, and Christian leaders are under-educated or not educated at all. Re-Forma has set as its goal to fundamentally remedy this situation.